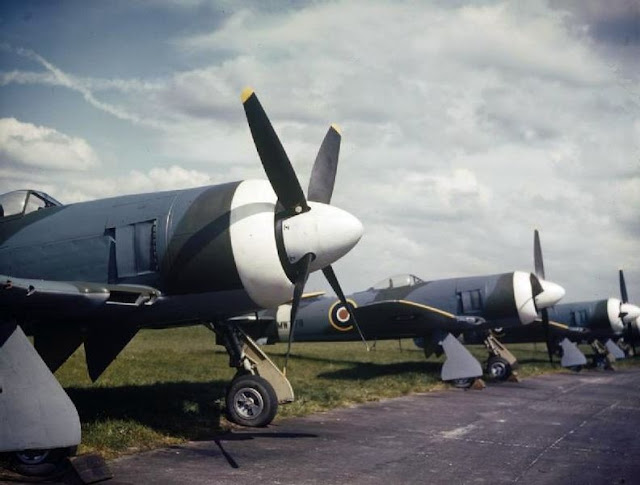 The decision to drop the Hawker Tornado allowed Sydney Camm and his design team to transfer the alternative engine proposals for the Tornado to the more advanced Typhoon II (later to be renamed "Tempest"). As a result the Tempest was designed from the outset to use the Bristol Centaurus 18 cylinder radial engine as an alternative to the liquid cooled engines which were also proposed. Two Centaurus powered Tempest Mk II prototypes were to be built.
Apart from the new engine and cowling, the Tempest II prototypes were similar to early series Tempest Vs. The Centaurus engines were closely cowled and the exhaust stacks were grouped behind and on either side of the engine: behind these were air outlets with automatic sliding "gills". The carburettor air intakes were in the inner leading edges of both wings, with an oil cooler and air intake in the inner, starboard wing. The radial engine installation owed much to examinations of a captured Focke-Wulf Fw 190, and was clean and effective.
The first Tempest Mk.II, LA602, flew on 28 June 1943 powered by a Centaurus IV (2,520 hp/1,879 kW) driving a four-blade propeller. LA602 initially flew with a Typhoon-type fin and rudder unit. This was followed by the second, LA607, which was completed with the enlarged dorsal fin and first flew on 18 September 1943: LA607 was assigned to engine development. The first major problem experienced during the first few flights were serious engine vibrations, which were cured by replacing the rigid, eight-point engine mountings with six-point rubber-packed shock mounts. In a further attempt to alleviate engine vibration, the four blade propeller was replaced with a five blade unit; eventually, a finely balanced four bladed unit was settled on. Problems were also experienced with engine overheating, poor crankshaft lubrication, exhaust malfunctions and reduction-gear seizures. Because of these problems, and because of the decision to "tropicalise" all Tempest IIs for service in the South-East Asian theatre, production was delayed.
Orders had been placed as early as September 1942 for 500 Tempest Mk.IIs to be built by Gloster but in 1943, because of priority being given to the Typhoon, a production contract of 330 Tempest Mk.IIs was allocated instead to Bristol, while Hawker were to build 1,800. This switch delayed production even more. The first Tempest II was rolled off the line on 4 October 1944 and the first six production aircraft joined the two prototypes for extensive trials and tests. With the end of the Second World War in sight, orders for the Tempest II were trimmed or cancelled; after 50 Tempest IIs had been built at Bristol's Banwell facility, production was stopped and shifted back to Hawker, which built a total of 402, in two production batches of 100, which were built as fighters and 302 which were built as fighter-bombers (FB.Mk.II) with reinforced wings and wing racks capable of carrying bombs of up to 1,000 lbs.

PR533, an early production Tempest F.B Mk.II, showing the bomb racks under the wings: the later style pitot tube can be seen on the outer port wing.
Physically, the Tempest Mk.II was longer than the Tempest Mk.V (34 ft 5 in/10.5 m versus 33 ft 8 in/10.3 m) and 3 in (76 mm) lower. The weight of the heavier Centaurus engine (2,695 lb/1,222 kg versus 2,360 lb/1,070 kg) was offset by the absence of a heavy radiator unit, so that the Tempest II was only some 20 lb (9 kg) heavier overall. Performance was improved; maximum speed was 442 mph (711 km/h) at 15,200 ft (4,633 m) and climb rate to the same altitude took four and a half minutes compared with five minutes for the Tempest V. The service ceiling was increased to 37,500 ft (11,430 m) The majority of the production aircraft built were tropicalised, with an air filter and intake installed in the upper, forward fuselage, just behind the engine cowling, and the L-shaped pitot head under the outer port wing was replaced by a straight rod projecting from the port outer wing leading edge. All production aircraft were powered by a (2,590 hp/1,932 kW) Centaurus V driving a 12 ft 9 inch (3.89 m) diameter Rotol propeller.
Tempest Mk.IIs produced during the war were intended for combat against Japan, and would have formed part of a proposed British Commonwealth long range bomber force based on Okinawa, Tiger Force. The Pacific War ended before they could be deployed.
The RAF passed 89 Tempest FB IIs to the Indian Air Force in 1947, while another 24 were passed on to the Pakistani Air Force. Several of these aircraft remain in existence, with three under active restoration to fly in the United States and New Zealand. 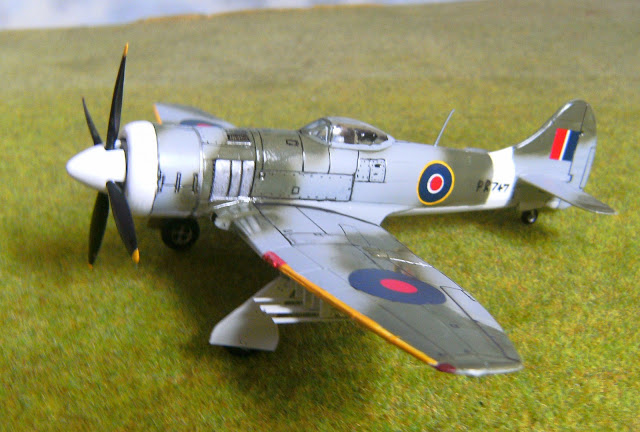 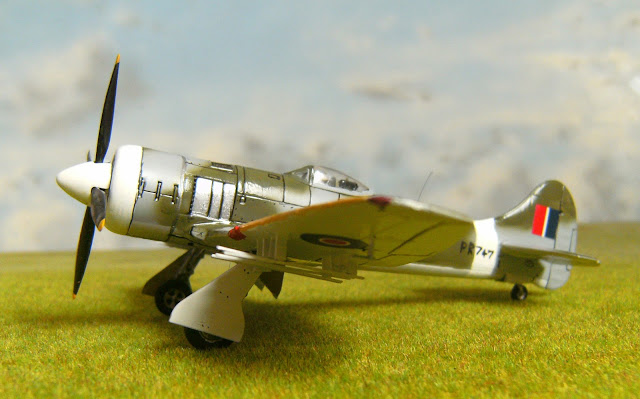 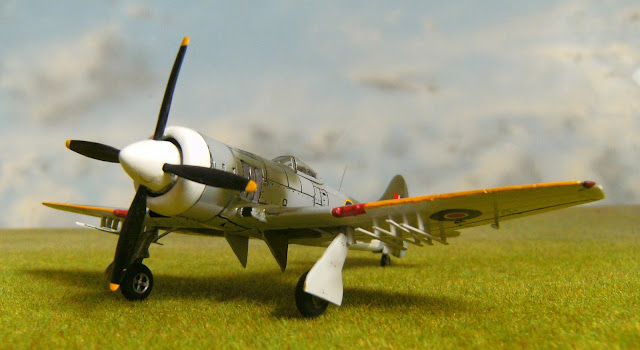 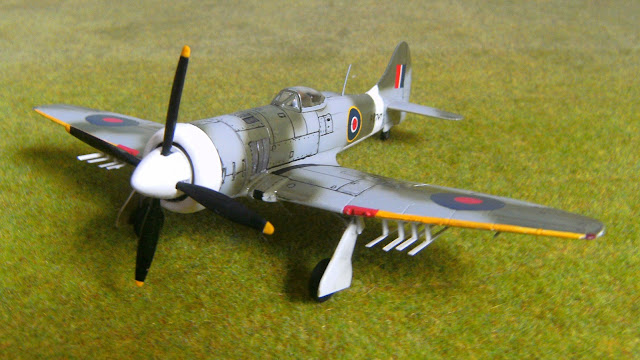 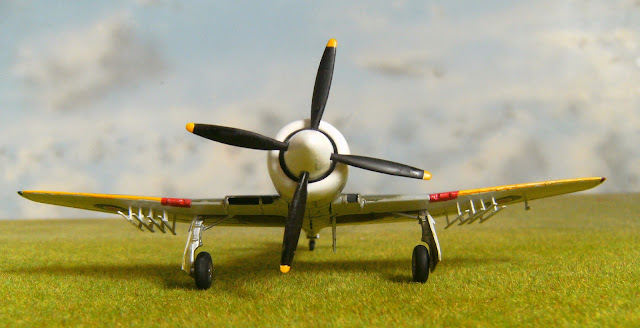 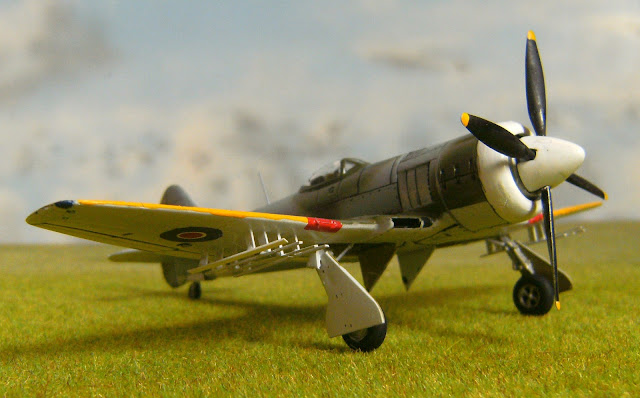 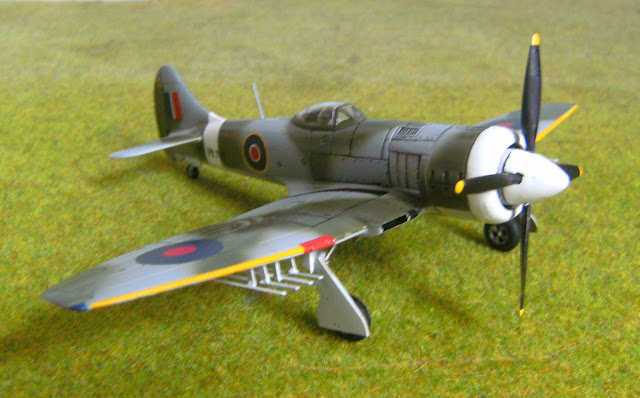 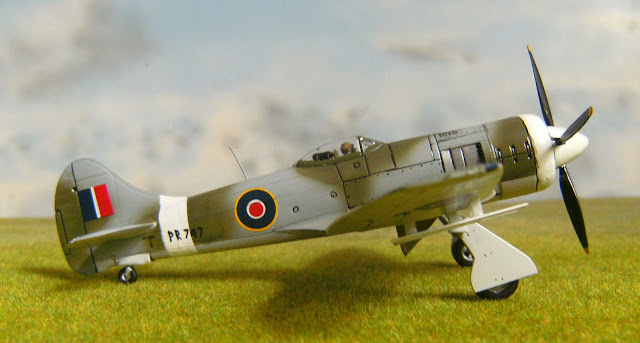 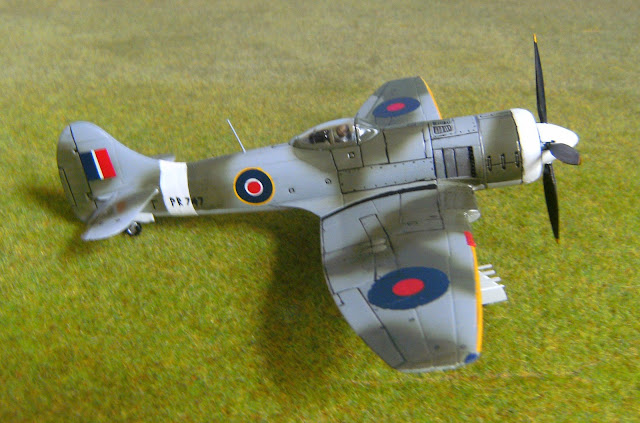 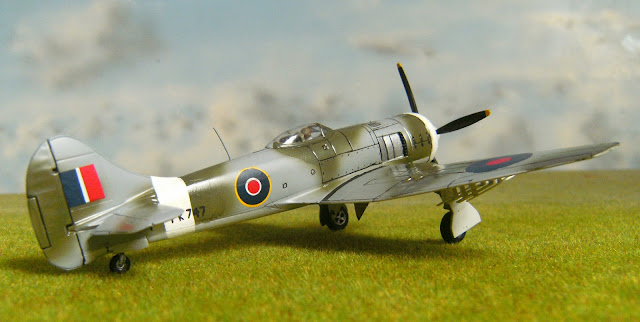 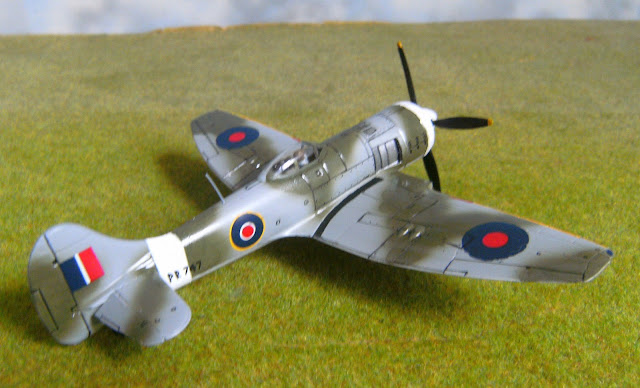 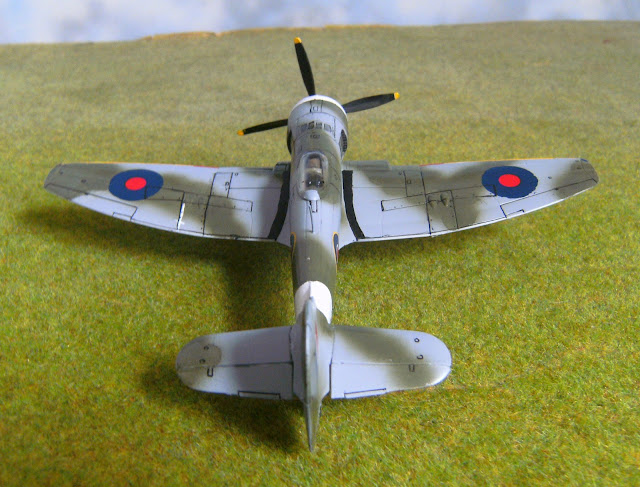 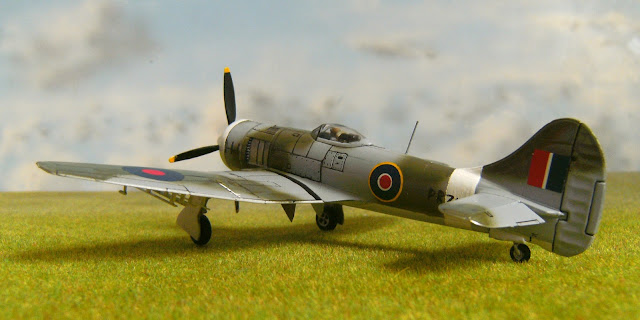 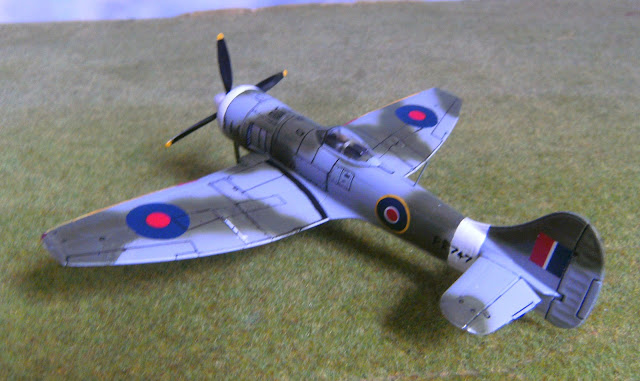 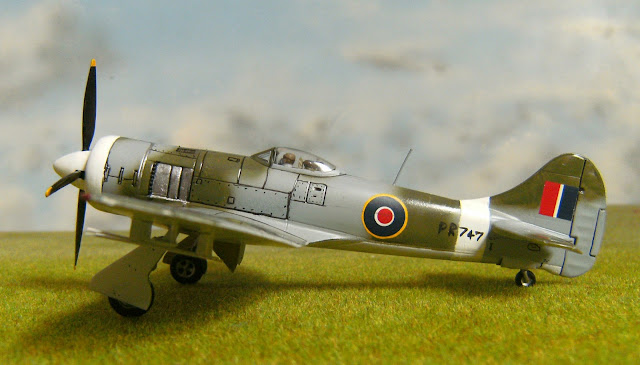 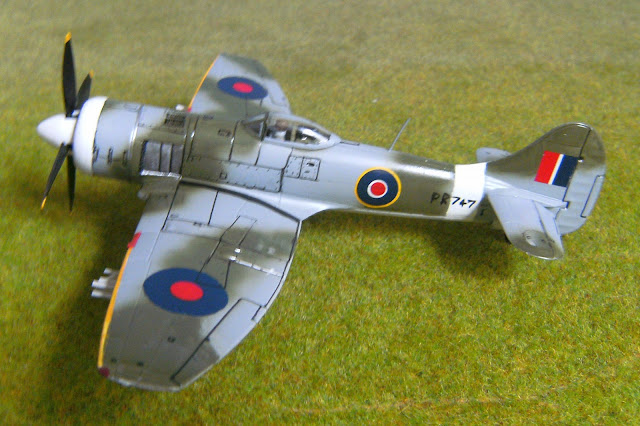 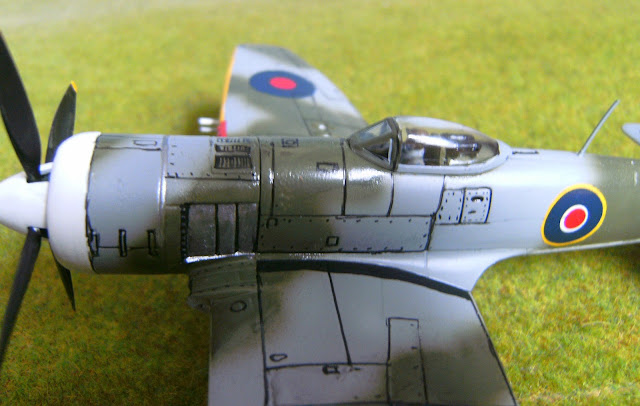 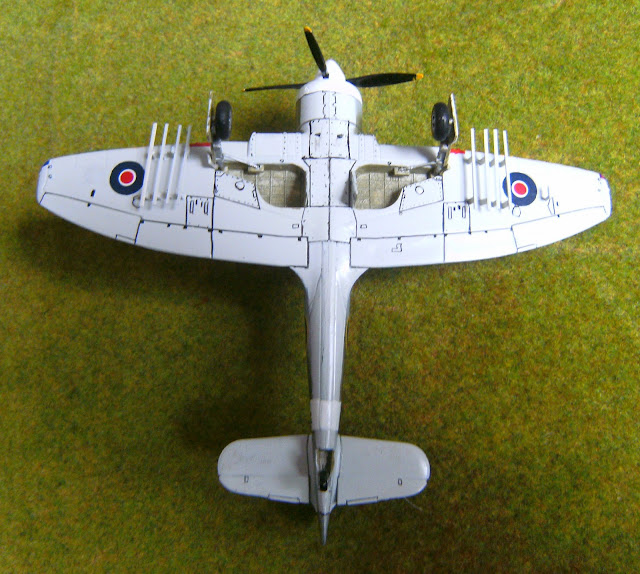 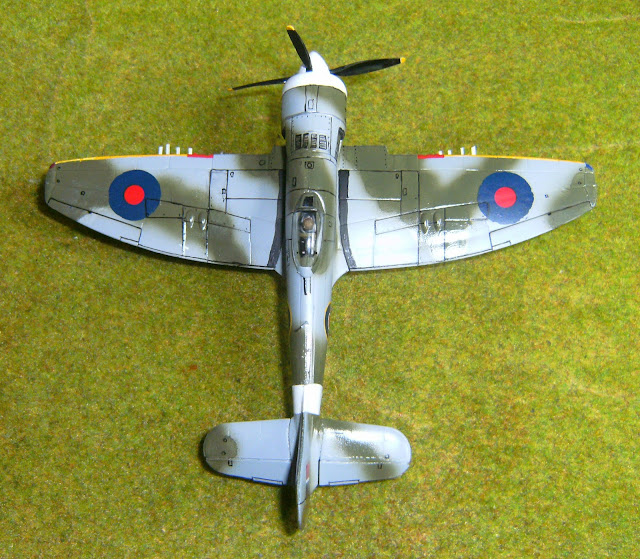